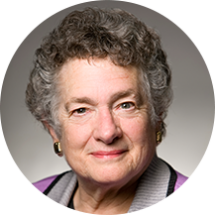 Linda Roberts is a national consultant and has spent her career focused on education and technology. Most recently, Linda has been as a member of the STEM education working group, part of President Obama’s Council of Advisors on Science and Technology. She also worked on the development of the current National Education Technology Plan.

Linda has advised Apple Inc. and other leading technology companies, continues to work with ed tech startups and foundations, and serves on the board of trustees of Sesame Workshop and on the boards of directors of the Virtual High School, Academic Merit, 3-Ring, Digital Promise Global, and MOUSE.

She previously directed the U.S. Department of Education’s Office of Educational Technology from its inception in 1993 to January 2001 and served as the secretary of education’s special adviser on technology. She developed the first National Technology Plan, launched five new technology programs for the Clinton administration, and increased the federal technology budget from $30 million to more than $900 million annually. She played a key role in the development of E-Rate, a multi-billion dollar program that supports schools’ access to advanced telecommunications. She is a former elementary school teacher and reading specialist, university professor, and academic dean.