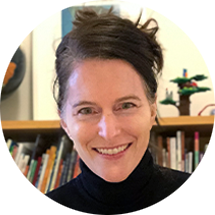 Shelley Pasnik, EDC senior vice president and spokesperson for equitable futures for all families, oversees EDC’s global early childhood initiatives. A nationally recognized expert in the thoughtful integration of digital media, she leads the Center for Children & Technology at EDC, where she guides the production of children’s educational services in collaboration with the U.S. Department of Education, PBS, the Corporation for Public Broadcasting, the Bill & Melinda Gates Foundation, Apple, Google, the MIT Media Lab, IBM, the National Science Foundation, and Sesame Workshop, as well as many other public and private partners.

Shelley has led EDC’s and SRI’s Ready To Learn evaluation for over a decade and is the editor of the book Getting Ready to Learn: Creating Effective, Educational Children’s Media. She appeared in a WQED feature spotlighting the vital role of families in young children’s science learning and is regularly quoted in news outlets, including the Washington Post, Axios, the Christian Science Monitor, EdWeek, and the Wall Street Journal MarketWatch.

In 2019, Shelley co-authored Integrating Technology into Early Learning: Promising Practices and Checklist with support from the Bill & Melinda Gates Foundation. She has served on advisory boards, including Apple ConnectEd, the Joan Ganz Cooney Center, and Global Action Project.

Shelley’s career began at the Center for Media Education, during which time, she testified before the Federal Communications Commission and the Federal Trade Commission on children’s media policy. She holds an MA from the University of Maryland, College Park.

This report, intended for early childhood educators, offers five evidence-based recommendations for integrating technology tools, such as computers and tablets, into a variety of early learning settings.

This checklist provides early childhood educators with practical information about integrating educational technology in their classrooms.