The Case for Foreign Aid

The Case for Foreign Aid

How do you promote global peace and security? Invest in economic development and education—now.

Participants in an EDC youth development program in Mali

For decades, foreign aid from the United States has supported economic development, educational initiatives, and peace and reconciliation activities around the world. And at only 1 percent of the entire U.S. federal budget, foreign aid is an affordable investment, too.

David Offensend, president and CEO of EDC, has seen the benefits of foreign assistance in countries around the world. He recently joined more than 100 CEOs from development organizations in asking the U.S. Senate and House of Representatives to argue in favor of continued international health, education, and development funding in the 2018 federal budget.

Q: Why is foreign aid a worthwhile investment for the United States?

Offensend: Foreign aid is a crucial tool in our overall foreign policy toolkit. It is proof positive of the value that we place on supporting education and economic development around the world. Foreign aid also provides an essential underpinning for our national security policy—it is well accepted that every dollar spent on foreign aid mitigates the need to spend many dollars on the military. When James Mattis, our current U.S. Secretary of Defense, was commander of the U.S. Central Command, he stated, “[I]f you don‘t fund the State Department fully then I need to buy more ammunition ultimately.”

Q: How can we show that development assistance is making a difference? 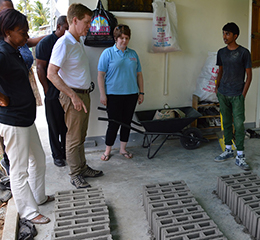 Offensend: We need to tell stories that convey the significant impact that development assistance makes in supporting stability and democratic values. It’s not just about giving money to another country; it’s about providing people in that country with opportunities so that alternative ideologies are less likely to take root. Such stories resonate.

For instance, I met a young man in Guyana who had been through our USAID-funded workforce development program and was now earning a living by selling concrete blocks he had made. Before starting the EDC program, he had no job, no prospects, and no hope. Now he sees a solid future and is an engaged member of society. Not only does he feel empowered and optimistic, his customers, family, and friends do as well.

Q: What is the most important issue facing the international donor community?

Offensend: The ongoing refugee crisis in Europe and the Middle East is showing that neither individual states nor nongovernmental organizations have the infrastructure to support all of the millions of people who need help. And the root causes of this crisis—political conflict and economic displacement—are not going to be solved any time soon.

I am optimistic, though. Germany has been substantially affected by an influx of refugees. In response, they have dramatically increased foreign assistance because they understand that improving conditions in Africa and the Middle East would have forestalled some of that migration in the first place.

Q: How does development aid make a difference in low-resource communities?

Offensend: In some of the places we work, there are simply no jobs and no significant employers, so entrepreneurship is everything. Funding and building programs that train a young person to open a microenterprise—such as a car wash or a produce stand—can be the difference between that young person having no income and earning a sustainable wage.

Such an increase in income can be life changing, especially in regions where disaffected youth are susceptible to recruitment by gangs and terrorists. Young people are less attracted to violence when they have the hope, and the agency, to build better lives for themselves and their families. That’s powerful. And I believe it also speaks to the importance of funding development programs. Foreign aid investments do make profound improvements in peoples’ lives.