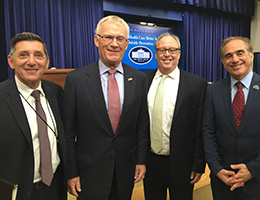 Mental health experts, staff of nonprofit organizations, and leaders of federal health agencies came together to discuss supporting those at risk for suicide and their families.

In introductory comments, Reed spoke about the role that health care systems can play in caring for and treating people at risk for suicide. He singled out EDC’s Zero Suicide initiative, a comprehensive plan to reduce instances of suicide in health and behavioral health care systems, as being a transformative model for suicide prevention.

“Previously, suicide prevention was not seen as a core responsibility of health care, and we were not well positioned to make quality improvements at the system level,” said Reed. “The Zero Suicide movement is shifting the responsibility for the delivery of suicide safer care from the individual provider exclusively to the health care system collectively.”

The panel discussion was part of an event examining the current state of suicide prevention initiatives. It also included the first-ever panel at the White House composed entirely of individuals with lived expertise—those who have made an attempt, or lost a loved one to suicide, and are using their experiences to inform future prevention efforts.

“Suicide safer health care is a key part of transforming our health systems,” said Carr. “It is significant that the White House recognized achievements that have been made over the past six years, from the launch of the Action Alliance to the revision of the National Strategy for Suicide Prevention and the spread of Zero Suicide in health and behavioral health care movement. The event also highlighted the significant work that we still need to do to ensure that our health care system is suicide safe.”

During the panel discussion, Keita Franklin, director for the Defense Suicide Prevention Office at the Department of Defense, announced that the Air Force has adopted the Zero Suicide approach on five installations across the United States. Mary Smith, director of Indian Health Services (IHS), also announced that IHS will soon embed a Zero Suicide approach to care within their health system.