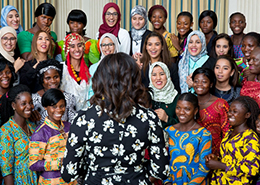 The young women first met with Obama in July when she visited the R.S. Caulfield School in Unification Town, Liberia, and led a discussion along with Liberian President Ellen Johnson Sirleaf. The visit is featured in the new CNN documentary We Will Rise, which had its world premiere on October 12.

The young women’s visit to the United States and the release of the film were part of a series of events in celebration of International Day of the Girl (October 11). In proclaiming the day, President Obama called out Let Girls Learn, a $1-billion initiative that supports programs in over 50 countries to enable girls to attend and finish school. (The U.S. Agency for International Development (USAID) has estimated that more than 62 million girls worldwide are not in school.)

Since 2011, the USAID Liberia Advancing Youth Project has enrolled more than 22,000 learners, of which 69 percent are women. The project has also conducted training for nearly 2,000 public school teachers and administrators to enhance the delivery of basic education.