What can we do to ensure that more young people from all backgrounds have access to high-quality STEM education opportunities?

As the pace of innovation in technology, engineering, and medicine continues to accelerate, there is tremendous opportunity for STEM professionals to land high-paying jobs while solving some of the world’s greatest challenges. But year after year, workforce data show that these jobs fall disproportionately to a single demographic: White men. This has major ramifications for women, people of color, and other potential STEM workers who have historically been excluded from the STEM workforce. 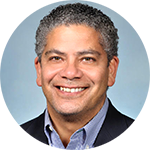 EDC’s Andrés Henríquez is a nationally known educator who helped write the National Research Council’s Framework for K–12 Science Education and the Next Generation Science Standards. As EDC’s new director of STEM Education Strategy, he is focused on broadening participation in STEM education so that more young people from all backgrounds see themselves in these essential positions. In this podcast, Henríquez discusses his own path toward a career in STEM education, and what he has learned about science, access, and equity.

On the state of STEM education in the United States

Henríquez: I think it’s evolved enormously since my days working at Children’s Television Workshop . . . but there is still, to this day, such a lack of understanding about what science is and how folks can have access to science. Particularly in Corona, where I worked at the New York Hall of Science, there was a sense that science, and the way in which you think scientifically, is not for everyone—it’s for some people, and not others.

On science as an issue of social justice

Henríquez: The other thing that science and scientific thinking does is allow people to engage in citizenship in a very, very different way. It allows you to question the kinds of things you might not have questioned. It allows you to do deep analysis of things that you might not have thought about in the past. The kinds of ways in which we think about science—or train scientists, really, is to question—and to not just question your own thinking, but to also question other people’s thinking. And that’s a very big deal, and I think all of our citizens need to do that, especially those that are underserved.

Henríquez: Some of the companies that are traditionally seen as STEM can really begin to tap into what are now pretty well-established networks with people of color in science, technology, engineering, and math. The workforce has learned that they also need to diversify and these companies where, traditionally, a friend of a friend was just being hired, they need to really think through how they can change their dynamics, and the ways in which they recruit, they hire, where it is they do hire from, and the networks they tap into.